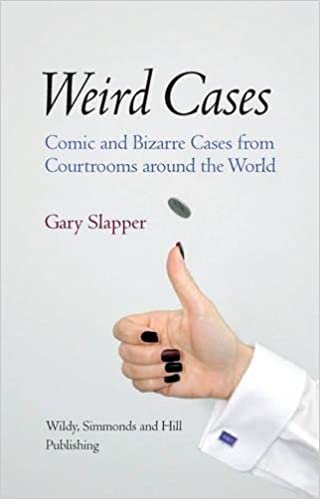 Book Title: Weird Cases: Comic and Bizarre Cases from Courtrooms around the World 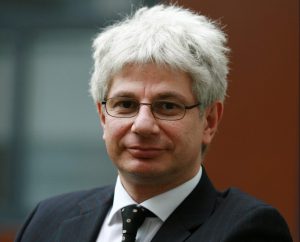 Every week a great many people slide into court either to do battle in a claim for compensation or court order or because the state thinks that they ought to be punished for a crime. The court is a theatre of calamity. With quiet deliberation, and controlled by thousands of legal rules, courts must be controlled by thousands of legal rules, courts must often come to rational conclusions about events that would in fact be rejected by television drama producers as implausibly bizarre. In 1823, Lord Byron noted that “truth is always strange; Stranger than fiction”.

Perez, who has no dental qualifications, was charged with deception for he did not meet professional standards. He was arrested in 2008 after his patients complained that he’d been knocking out their old fillings with screwdrivers and pulling teeth with household pliers. His main apparatus was a DIY power drill. Mr Perez was arrested after one patient suffered unendurable pain and summoned the police.

A key feature of any profession is that it restricts admission to those who had successfully achieved the required training but there have been cases like Perez who have been acting professionally out of no experience.

Another case emerged in 1992 when Mohammed Saeed, a layman, was found to have been fraudulently practising as a family doctor in Bradford for 30 years. His partners had grown progressively suspicious of his absence of medical knowledge. He was given a 5-year jail sentence.

Paul Bint in 1980 faked as a doctor in many hospitals for 12 years. He did all sorts of medical procedures-including trying to assist in a heart bypass operation.

In 1994, Roy Grimshaw, another fake doctor, was jailed for fraud after gaining a job as a clinical services manager at Guy’s Hospital in London. Paolo Bonaccorsi was an appointment as a senior government lawyer in Calabria, Italy, in 2001. It gradually became apparent, however, that he didn’t know any law-and that provided to be something of an obstacle in the performance of his duties. Checks revealed that he was not registered as a lawyer and his legal qualifications were fakes.

Recourse to law by disappointed people is extensive but some cases break new ground. In 2005 a Brazilian woman attempted litigation against her partner for failing to give her orgasm similar cases were observed by other women from Zundiai, Brazil, etc. In the context of claims for marriage nullity, the courts have considered orgasm but dismissed it as having no legal significance in 1952 judgement, the high court held that the necessary and the sufficient conditions are vera copula were simply erectio and intromissio, which amounts to nothing more than the act of intercourse.

“The priest concluded the ceremony and the couple were married”, lawyer Alberto Figone told the court. Then, referring to his client, the bride, he continued,” but she was not able to take any proper photographs of the ceremony because she was semi-naked”.

Semi-nakedness is an unusual feature of weddings at Chiavari on the Italian Riviera. So how the 30-year old bride came to be in this state was recounted in detail to Judge Pasqual Grasso at the civil court in Genoa. It was the key point of the case.

The bride in this case was at the altar when the stitching on her dress came apart and the dress slipped open, common revealing her bottom to the whole congregation .The incidence occurred in 2006 and the matter went to court in 2008 when the bride sued the dress shop for twenty three thousand Euros for financial loss and moral injury. Wedding dresses have featured in various other cases from New Mexico, Elgin, Kansas etc.

What is the difference between a courthouse and a brothel? Very little sometimes, if allegations made in a criminal hearing in Ottawa are true.

Laura Emerson, 28, was accused of using the courthouse as the headquarter of her prostitute business. She was accused of luring and then forcing women to become prostitutes, running the business from the court, and even taking the calls from clients during the working day.

Clearly this is not an enterprise that deserves to have the courthouse as its administrative head office. From nineteen fifty five, Canada did incorporate prostitution into legal, civil society and it was decided that prostitutes could be taxed.

Pleading guilty to a drunken driving charge at Limerick in Ireland in 2008, Fiona Porter told her lawyer that she had drunk alcohol on the evening in a distressed state when she found her husband in bed with her mother. It was found that her husband was in an affair with her mother for two years and Mrs. Porter went into a mental free fall. Upon Lawyer’s request on leniency the judge spared Fiona a custodial sentence. He suspended a four-month prison term on her and banned her from driving for six years.

Joanna Webb a 43-year-old woman was arrested in 2004 in Texas for selling sex toys to her friends in a private party. After a few months of legal argument and public debate the prosecution was eventually discontinued.

An exercise in ambiguity

John Peoples, a property lawyer started using services of a sex worker, Ginger Dayle in 2007 at the rate of 275 Dollars an hour but Dayle had written on the forms for two-hour sessions the rate of 1100 Dollars. John claimed that he has been defrauded of 850 Dollars over eleven sessions. He sued his credit card company for failing to remove the disputed sums from his bill to charge Dayle for them and he asked for over 1 Million Dollars in damage including compensation of emotional injury.

If, through lack of reasonable care you injure your lover in a car accident you are liable to pay compensation. What if the injury is sustained during canalization?

A question that was answered in 2005 by the Massachusetts appeals court. When the court ruled that while sexual conduct might be actionable, merely negligent conduct would not be. It dismissed a man’s case who charged his partner for making him suffer from penal fracture.

According to a regulation passed in 2002, women who wish to join the Indonesian military forces must undergo tests to ensure that they are virgins.

Under English Law, the minutiae of intercourse can be judicially examined to determine matrimonial status . A marriage that has not been consummated is voidable. The Law requires penetration to a certain depth and for a certain duration to prove orgasm.

It was announced in May 2000 that Jim Hudkinson, chief executive of a major fashion company has been sacked for touching one of his employees at an awards party. He was dismissed for inappropriate sexual behaviour. The way employment law treats cases of sexual harassment has changed and the male employers are no longer permitted to regard female employees as a fair game.

The Price of Love

Andy Hayle from Wrexham was inundated with offers in 2003 after he put up his wife up for auction on the internet. The advertisement on eBay said “The chassis is in excellent order for the mileage and warranty given at an extra cost.

In the centuries before Legal Divorce was available, the auctioning was a popular way to dissolve broken marriages. Such wife sales were held in Market squares from the middle ages till 1887. They were illegal but were tolerated by the authorities.

To be taken twice a day

In 2009, the US tax court ruled that money spent on prostitutes and pornography is not tax-deductible expense. William Hulby, an established tax lawyer had submitted to the internal tax revenue services a range of expenses he wanted deduction from tax liabilities as medical expenses. Medical care can be deducted for diagnoses, cure, and litigation, prevention of a disease affecting any structure or function of the body. And Hulby argued that his sex expenditure was made to treat disease and to improve some aspects of his anatomical functionality. All his claims were refused but then he brought up another case against the commissioner for internal revenue in the tax court but the court said that none of his sex therapies were prescribed by doctors and thus he has no right to claim tax deduction.

The Tables of Love

When law is hard to swallow

It was a kiss that featured in a major legal dispute in 2009 and generated thousands of them from lawyers, keyboards in francs . The dispute began when the international tennis star Richard Gasqet tested positive for cocaine and said that he absorbed the same during passionate French Kissing with a woman. Pamela, the woman he kissed met him in a restaurant where they struck up a friendship which quickly turned romantic and they exchanged many French kisses. The international tennis foundation found that Gasqet and Pamela kissed at least seven times, each kiss lasting about 5 to 10 seconds. The tribunal found that the cocaine had entered Gasqet’s system by means of Pamela’s kissing. The judgment declared that it was not unnatural for Gasqet to have been attracted to kiss Pamela and it imposed the minimum sentence to offer ten-week ban.

In Kenya, James Kimondo sued the leaders of a coalition of women group for the absence of sex in his life. This consortium of women called “G-10” had organized a boycott of sexual relations with men in a bid to pressure political leaders to put their differences aside. This pledge affected Mr Kimondo’s life when his wife refused to honour his conjugal rights because of the campaign. He sought damages for anxiety and sleepless nights.

Food is an indispensable part of the behavior of people and it has featured itself in unusual ways in legal cases.

It was in February 2009, when Jean Fortune arrived at the drive-through restaurant hungry after work and placed his order. He got into an altercation with the cashier when he found that the restaurant had no lemonade. He dialled 911 and the police came, the operator of the restaurant argued that customer service is not the reason to call 911. However; the police officer filed the affidavit for the court noting unhappiness of Fortune with his order and the complaint that it was taking too long to cook. Fortune was charged with misuse of 911 communication systems there had been more incidences of the emergency service systems found in Poland, Britain and New Zealand.

The book is filled with many such weird cases where judges had to face cases involving arguments that were never heard before and the unusual explanations of claimants had been hitting the courts throughout the world. Not just the individuals but at times the companies also indulge in such cases.

The case between coca-cola and the Koke Company that was presented before the court in 1920 is one such case. The Koke Company argued that the coca-cola should not be protected by law because it was falsely representing that its drink contained Cocaine. Justice Holmes acknowledged that, in earlier years the drug had been used in the drink but it was eliminated afterwards, however the picture of coca leaves and cola nuts on the label mislead many people.

Not leaving the judges who judged the cases, at times fall into traps and become participants of such cases. An example was a judge who ordered a woman to drop her trousers in court. Obviously, the judge did not enjoy a long and distinguished judicial career but was removed from the office soon. In another incident, a judge tossed a coin to determine which parent should have their child at Christmas.