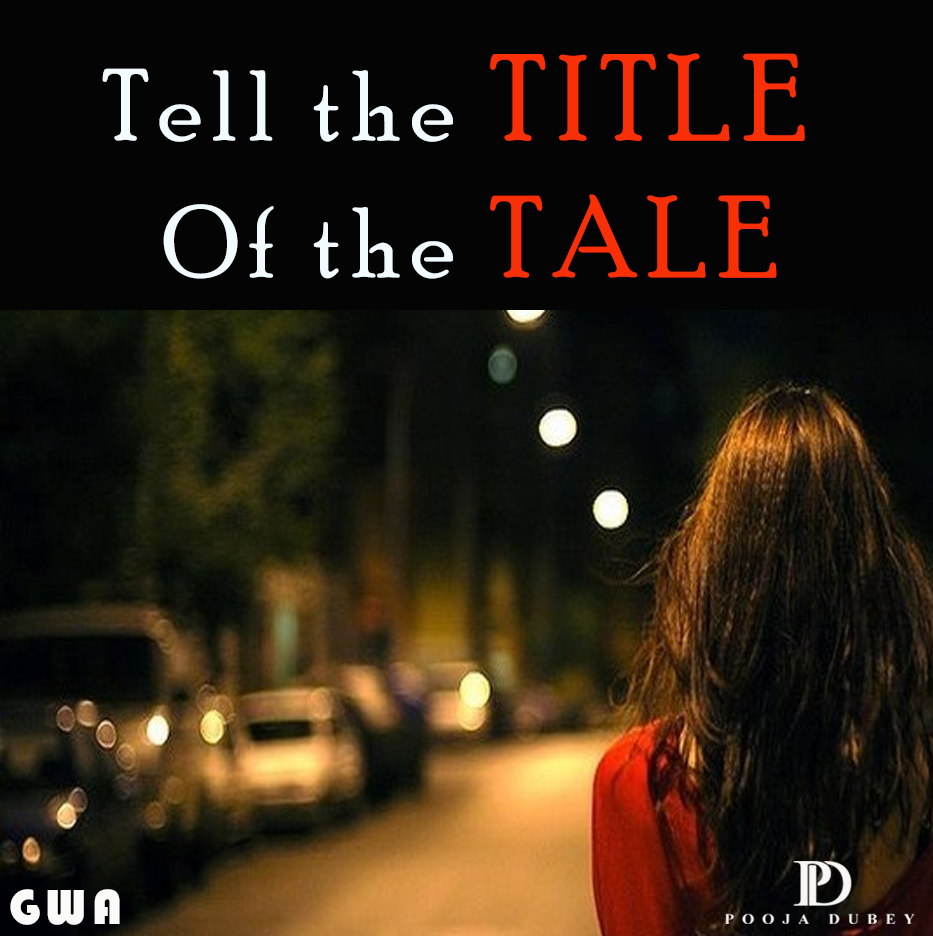 Tell the TITLE Of the TALE – GWA Writing Challenge

I am going to tell you a story. Your job is to guess the title. The writer with the best title gets the chance to be featured on our website as a winner and also gets a chance to publish a 1000 words short story of own.

So, let us begin…

I was walking down the lane, next to my office. Gosh! How I hated to stay late in the office. And the worst part was that our office building was on a hillside where you hardly get a cab. Ideally, the office should supply a van but not ours, not anymore. In fact, I was not even sure if I would stay here much longer. The company was in blues and many believed that it would shut soon.

Why do I have to get my first job in a company that was soon going to be bust? Well, I was already planning for my leave but was not getting any jobs. I was only 6 months old in the company. How would I ever get a good jump? Or should I settle for less? I kept thinking and thinking, worried sick and I did not realize that I took a wrong turn.

Oh no! That was going to take me much longer. At night, the roads are empty and yet so confusing in this part of Mumbai. Where was I going? Towards highway or towards Aarey Colony?

I guess the wrong turn meant, I was indeed going towards Aarey, a shortcut to Goregaon. It would have been nice normally, but Aarey shuts down to the public by 10 or 11. Once I asked one of my friends the reason and he told me that area is not safe.

Not safe means? I wondered. Are there thieves? Killers? Animals? After all, it was a jungle but whatever it was, it would not have been wise to go there, but then how could I not get attracted to the beauty of the place? I loved those roads, all shadowed with long trees and shrubs. There was also a lake in the way, and I often wondered whenever I would travel by auto if I would ever get a chance to visit the place walking.

And today was my chance. I did think of not playing unsafe, but what was the harm in scanning the place, and if I felt it was unsafe, I would turn back anytime. I was a daring kind. In fact, my sisters always used to take my help whenever they were afraid of something. At night, when I used to live in Nagpur, which is much smaller than Mumbai, we used to face the problem of load shedding, which fortunately never happens in Mumbai, not at least in my area.

My sisters would not go to the kitchen or washroom without holding my hand. I was not eldest but the middle one and yet the most daring one; At least, when it was about the darkness and those stories of ghosts that are usually told by parents to their children when they did not sleep. I was indeed a fan of ghost stories and would not mind watching movies like The Omen, The Exorcist, and The Ring at night after everyone was asleep.

So, I decided to satiate my curiosity and also thought of taking my picture against the backdrop of the dark jungle. Then, I would put it on Facebook. Good show it would be of my daring dare. How curious would be my friends and would ask me to tell them how I did that. Any apprehensions I had, were suddenly gone, just at the thought of rocking on social media between my friends. Ya, they knew that I was not the one to be afraid of anything but this would be an adventure. Everyone was posting pictures and I was hardly doing anything; Except working late night every day with no offs on Saturday.

Gosh! I thought Mumbai was interesting. But it wasn’t for me. Except if this Arrey night made my day or night or whatever. I could not wait anymore and dived straight up to the lane, started walking near the pipes, I was slow and watchful. It was a slum area and there could be people out there, but I was not expecting many at this hour. But Mumbai never sleeps, they say. The people here stay late and are even found chilling out late-night.

It was almost midnight. I kept walking and saw a few people inside their small self-made bricked huts or were standing near their houses, no one was on the road. I crossed the pipeline that was surrounding the bridge towards Arrey and then reached the actual area of Arrey. To my horror, the gate was shut and there was no way I could enter Arrey. It was such a disappointment. All my social media dreams now felt like broken glass with its little pieces floating in the dark.

Something was rather floating in the dark and I looked up over the pipe and saw a little boy playing. He was trying to balance himself with his legs and hands both trying to hold the pipe. At first, he looked ok but then, I felt like he was about to fall. I reached out to help and ran towards him. I was just near when he lost his balance and fell down with a thud on the ground. Bang! Oh No, he must be hurt! I ran fast! I was unable to see the boy properly because of the dark but he must be hurt. I was sure of that.

I bent down and asked, “Are you hurt?”

How shocked I was when I realized that there was no one on the ground. Was I dreaming? Who was the boy? He was too small to not get hurt and run so fast that he would disappear before I reached. He did not even scream of pain. What was that? My illusion?

I kept looking at the ground, at the same place where he fell, rubbed the place with my bare hands. It felt rough. I was expecting blood but it was dry.

I looked up to get a sense of how severe was the fall and how did the boy survive? Did he even have a chance? And when I looked up, I saw the boy standing on the pipe, smiling at me and his eyes twinkled as he winked at me.

Now, your turn to come up with a title, and when you do that make sure that the suspense is not lost in it.